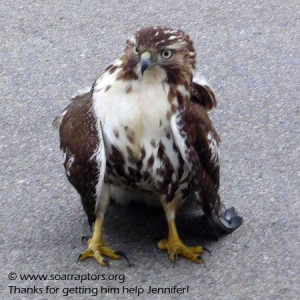 Let’s start this hawk’s story with details from the caller… “Wow! Called the sheriff’s department, who gave me the number for the DNR. Less than 30 minutes, later received a call from a raptor project in the western part of the state. They are contacting a local volunteer. I got him into a safe area (hopefully).” Thanks to Jennifer’s actions, this juvenile red-tailed hawk is receiving care for what we are assuming is a car collision on Iowa Highway 24 east of Lawler four miles.

Thanks again to Raptor Resource Project Board Member Dave K for the rescue and meeting up with a SOAR transporter (me) in New Hampton. This juvenile was a bit concerned about the entire situation and had this open-mouth stare for the transfer and again later than evening when transferred to an appropriate sized crate (we are very large predators to hawk and his reaction is not surprising).

Back story: We both thought we were going to be dealing with a bald eagle, so both Dave and I were prepared for a much larger bird! ~ Linette

20 February 2016
The x-ray confirmed suspicion that this hawk's right humerus is fractured too close to the shoulder joint for surgery. Kay will wrap the wing and we'll try... because that is what we do... even though the prognosis for a good union of the two bone ends is not good.

18 February 2016
This red-tail is going for an x-ray this afternoon.

16 February 2016
This little RTH was transferred from an eagle-size transport crate to something more his size! Plan is to transfer to Kay tomorrow. He does have a fractured right humerus. See photo below. 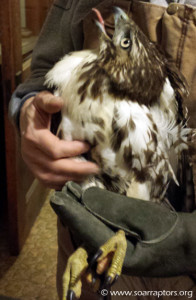 HY15 RTH rescued from east of Lawler on IA 24. Checking his keel for body condition (thin or not) when transferring to a smaller crate for the night.