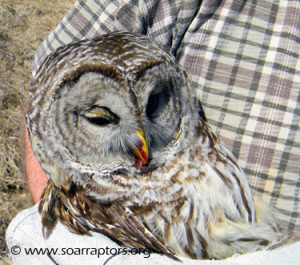 13 March 2015
The right eye is still dilated more than the left, but owl seems perkier today.


2 April 2015 – SOAR friend Marla helped Skylar release this barred owl. Marla reported, “The Wheeldon Family, near the site that the barred owl was originally located, was kind enough to allow us to release the owl at their farm. It was picture perfect, with open pastures, treelines, and cattle! Skylar had a moment to hold him and off he went! He landed on a post and got his bearings together, flew to the tree line to continue getting 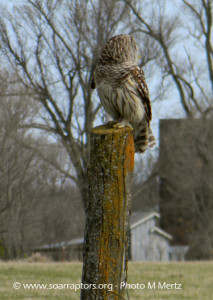 his bearings. A blue jay scooted him on, then we heard crows giving him a ribbing!” Thanks to Marla for getting some photos after she handed the owl off to Skylar! Lucas County Conservation naturalist, Jodi, was there as well! 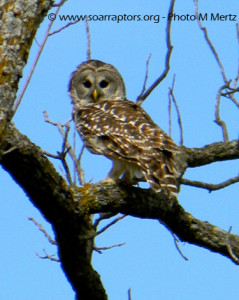 It’s not often that rescuer can also release! Thanks to Marla for helping Lucas County Conservation executive director, Skylar Hobbs, with both rescue and release.