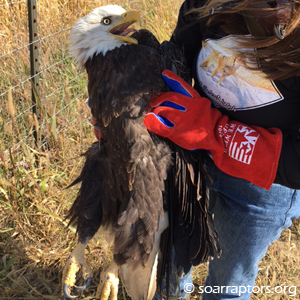 A persistent concerned citizen called the Sac County Sheriff’s office and others she thought could help, including the area conservation officer. The DNR conservation officer called SOAR and gave location. Former SOAR intern and now Sac County Naturalist, Megan rescued this eagle from the ditch along US 20 (it is a four-lane).

While no one witnessed the accident, the time of year, the location of rescue, and the eagle’s injuries are consistent with being hit by a vehicle. Megan sent photos and said, “Kay thinks hit by car in the back and has a lower spine injury. The eagle was alert and can flap wings (and bite!), but there was no leg movement. “

18 October 2016
With no improvement seen in leg function in this eagle, an appointment was scheduled with Dr. Dirks. The doctor confirmed suspicions that this eagle would not regain use of the legs. The eagle was humanely euthanized.

14 October 2016
Even though this eagle is eating, drinking, pooping, we are not seeing improvement in leg function. I know that is not what any of us want to hear. 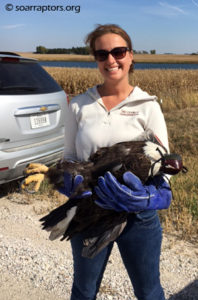 Thanks to Megan Cook with Sac County Conservation for catching a post on the Iowa Birding Facebook page about this bald eagle and being there to assist Kay!