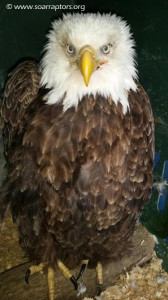 Cassie picked up this adult male eagle from the Wildlife Care Clinic for continued care. Seems this eagle was hit by a semi truck in rural Marshall County. Driver called a friend, then the friend rescued and drove the eagle to Wildlife Care Clinic in Ames! Veterinarians at the clinic did surgery on the right wing and pinned the humerus fracture. This eagle also had “road rash” along the finger bones of the right wing. Kay and Cassie pulled blood for a blood lead level on admit on the 5th and his blood lead level is low and considered background / normal. He is thin at 6 pounds.

11 May 2015
Marshall is just starting to do multiple laps in the flight pen.

26 April 2015
Feathers are growing at the surgery site! Marshall was moved to the 100' flight pen. Photo below.

19 April 2015
Pin removal was completed last Friday by Dr. Dirks. The six pins were removed from the right wing while the bird was under anesthesia. All looks good as far as bone healing -- luckily the fracture was in the middle of the bones away from the joints. He'll be on antibiotics again for a few days and will stay in ICU until done with all meds. Photo below.

16 March 2015
Marshall was moved to slightly larger area. Checked surgery site. No infection, all clean and dry. Still feisty and nasty (good sign for a patient), so far so good.

15 March 2015
He is eating well on his own. Part of today's tasks is to look at the surgery site and make sure all is healing as should, possibly will be moving out of ICU crate to a small room.

6 March 2015
Now perching and 'brighter' today. He is getting precautionary antibiotics in his food. He has put over two crops of beef and just had venison before the photo was taken. 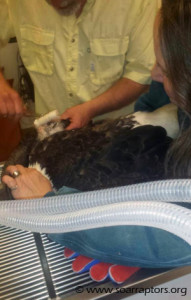 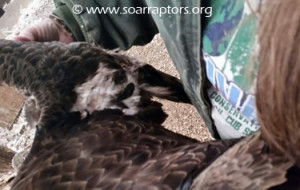 8 June 2015 – The adult bald eagle that was hit by a semi in rural Marshall County in early March was released at McFarland Park. Several groups assisted with this effort, again showing that it takes a village! In addition to SOAR, Marshall County Conservation, the Iowa State University College of Veterinary Medicine Wildlife Care Clinic, and Dickinson County Small Animal Clinic all helped this bird!