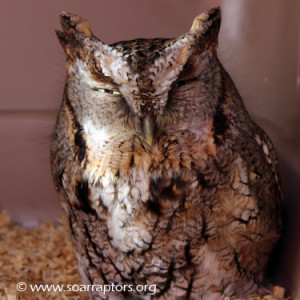 A driver was on the highway near Marysville in Marion County and hit a small bird. The driver went back and picked up a screech owl and tucked into his lunch pail until a carrier could be located. He met up with SOAR friend Marla that reported likely only had a concussion, could feel no fracture of wings or legs. Little owl did cough up a wee bloody pellet for Marla.