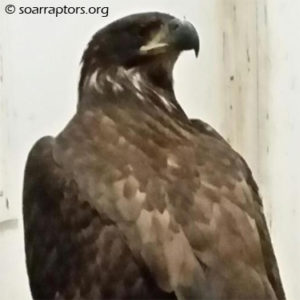 A Meservey resident found a very young bald eagle sitting on her porch railing and did not look at all well! A Wright County Conservation staff member was able to rescue (thanks Eric!) and his parents were able to transport to SOAR.

This eagle was very, very thin at admit and covered in bird lice. (That is not uncommon when a bird is very thin and in poor body condition.)

Kay said this fledgling should have been cared for by the adults and is unsure why the fledgling was separated from adults.

30 December 2016
Meservey is flying well and will be ready for release soon.