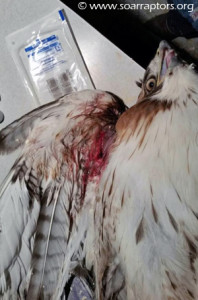 Thanks to Brian for getting this adult red-tailed hawk out of the barbed wire fence and meeting up with Terrie! Barbed wire fences are just nasty. Bone and tendon are exposed on the right wing, but nothing is broken. The wound was slathered in Neosporin and covered with a clear, breathable bandage to try to keep the bone alive, then the wing was wrapped. Cross your fingers.

26 October 2015
The wing did not heal well enough for flight, this red-tailed hawk was euthanized.

2 June 2015
The wound healed, the bone is good, but the patagium (the skin on the leading edge of the wing) does not look good. The hawk is in the flight pen.