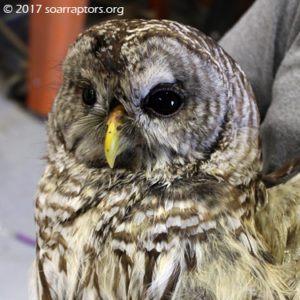 Monroe city employees Jeremy and Marc called SOAR friend Marla about a barred owl they retrieved at a residence within the City of Monroe. This fledgling / juvenile owl was near a wooden privacy fence and robins were tussling with him. There appears to be a left wing issue and two talons have been encased in what looked like hardened pellet debris. Skin is pink and raw on the feet and near the beak area.All debris was removed from the talons and antibiotic ointment was put on the raw areas. Antibiotics will begin 29 June just in case it is a secondary infection. Has been feeding or being fed and was not thin.

These are the same two young men that rescued a great horned owl from the Monroe water treatment plant last summer. Way to go Jeremy and Marc!

9 July 2017
Marla's suspicion that there was a left wing issue was correct. The wingtip died and without a complete wing, the owl would not be able to sustain flight for hunting and was euthanized. 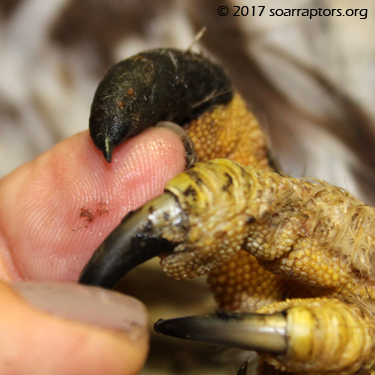