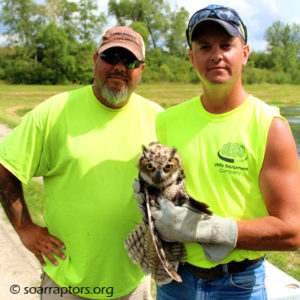 Monroe city employees Jeremy and Marc called SOAR friend Marla because a great horned owl that had been hanging around the city lagoons on Friday was still there on Monday. Jeremy and Marc were able to rescue the owl and get it out of the August heat for Marla to pick up.

Marla noted that the owl is young and was emaciated with some external parasites.

1 September 2016
After a round of wormer medication and a couple weeks of feeding in ICU, this owl was ready for transfer to the GHO flight room.