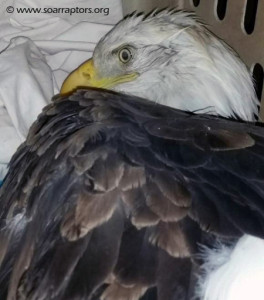 Kay received a call in the early evening that an adult bald eagle was rescued in SW Iowa — almost Missouri. With fingers crossed, I hoped for the best. Kay texted the bad news… an adult female bald eagle, weighing 11 pounds, dehydrated, and a blood lead level greater than 0.65 ppm (On our diagnostic equipment, a level above 0.65 parts per million registers as “HI.”) The eagle was having seizures last night. Chelation therapy was started. Learn more about treating raptors with elevated lead levels here. Thanks for the rescue Andrea.

11 February 2016
New Market had been in the heated ICU since the end of December and was monitored for returning symptoms of elevated lead levels (labored breathing and green mutes). Last week she stopped eating on her own but was eating some from forceps. On 7 February she was moved back to an ICU crate. She didn't want to eat. She was given high calorie fluids and offered small bits of meat. Kay reported that on the morning of the 11th, she ate great and was acting all "eagley" and would talk back to Spirit and Liberty. Later that afternoon, I received a text from Kay that said, "New Market just had a seizure and died... I'm so sad."

28 January 2016
New Market is eating on her own... but her food choice is not a normal eagle diet. She likes pigeon. She likes quail. You can support the rehab of this bird by visiting our Amazon Wish List and ordering a gift certificate from RodentPro - see the link below. RodentPro also sells quail!

26 December 2015
A blood lead level recheck was done today and her blood lead level is down under 0.2 parts per million. She'll not receive any chelation medication for at least two days. She will be watched for signs of labored breathing and other symptoms that may indicate her lead level has gone up again. She will eat if you give her food by forceps - at least she is eating.

16 December 2015
New Market is still not wanting to eat on her own, but will take from forceps, so is getting hand-fed two crop-fulls each day. She is standing and has her head up.

9 December 2015
Kay reports 'New Market' is standing and has had more chelation medication and high-calorie fluids.


This photo taken 31 December 2015 and shows a much brighter New Market eagle! 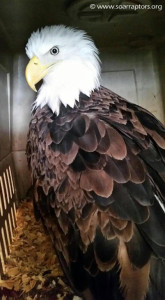 This pigeon and quail eating eagle could use a gift certificate from RodentPro for quail. Click here for the SOAR Amazon Wish List!