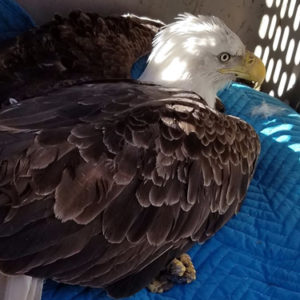 This bald eagle was transferred to us from Wildthunder Wildlife & Animal Rehabilitation & Sanctuary, a raptor, bat, and mammal rehabilitator. This bald eagle was reported by several folks in the town of Oelwein to Buchanan County Conservation who rescued and took to Wildthunder on 22 February. She was found near a road and near a roadkill raccoon… so yes, we suspect she was hit by a vehicle. This eagle cannot stand and feet are clenched.

27 February 2017
The roads are better and were able to get in to see the veterinarian for an x-ray. While she has no ingested lead, she does have a spinal fracture. Spinal fractures typically do not heal, but we often give the eagle a couple days for healing, have appointment for Friday the 3rd if no improvement of leg and foot function.

23 February 2017
Kay reported she weighs 13.5 pounds (!) and does not have elevated lead levels. Snowing and roads bad, will get x-ray as soon as able.