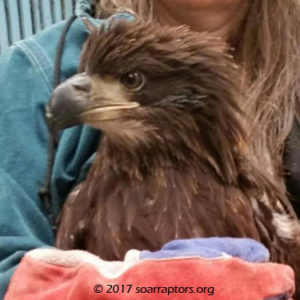 From “perusing” Facebook posts, it seemed that this young eagle had been causing concern as it was seen often in the same location. Adair County Conservation staff was keeping a watchful eye on and was able to rescue on 31 July. As usual, the back story on this youngster is missing. What we do know is that this eagle weighed only 5.5 pounds at admit and was favoring his right wing.

11 August 2017
By beak depth, this hatch-year eagle is a male. His lead test came back the seldom seen 0.00 ppm. By the 11th he had received wormer medication and had gained two pounds! Time for the flight pen!

14 August 2017
The right wing droop is still present and Orient is not interested in flight, but is getting his exercise by climbing the branch ladders to the middle perches in the flight pen.

10 October 2017
Orient can fly one length of the flight pen, but has no stamina.

1 November 2017
Stamina improving and can fly several laps at one time.