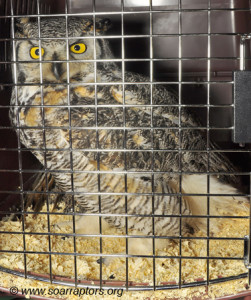 Our first admit of the year is a great horned owl from Plymouth County that likely had a bad encounter with a moving vehicle. Has a right wing injury and that wing was frozen.

Thanks to concerned citizen, Luke, for the report about the owl and for a donation of a carry-crate. Thanks to Tyler for the photo and care of the owl until transported.

21 January 2015
The wing is still swollen, but is at least warm, so maybe some hope?