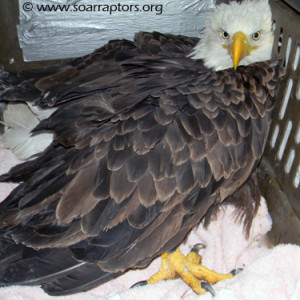 SOAR received a call that staff at Port Louisa National Wildlife Refuge had an adult eagle that had been hit by a vehicle that needed help. After many texts and phone calls… a refuge volunteer drove the eagle west to meet up with SOAR friend Marla. This female was full of cockle-burs, missing about half of her tail feathers, and had blood in the mouth when Marla did a quick look over. She was given fluids, the base of her tail feathers cleaned and slathered with antibiotic ointment.

19 May 2016
Her tail feathers are not in the best shape, so will release at SOAR to monitor, if needed. Release will happen after area eaglets are bigger!

10 October 2015
Standing now but not putting equal weight on both feet yet, has been moved to a larger area to give her more room to stand. Kay is thinking pelvic injury and those take quite some time to heal. 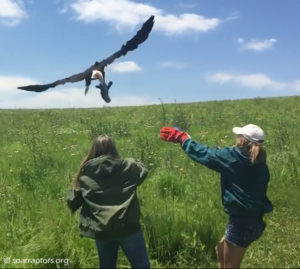 Port Louisa eagle admitted September 2015 was released at SOAR on 23 June 2016. Yes this eagle took off with one of Kay’s gloves… and dropped before went much further. 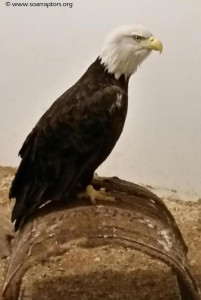