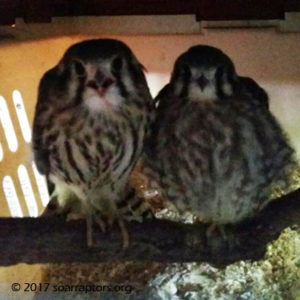 SOAR volunteer and Woodbury County Conservation staff member, Tyler, rescued these two hatch-year female kestrels. They appear to be without injury and just need a bit more support before returning to the wild.

Thanks to Kevin and Kim Gerety and family for the donation of the crate these two are in!

1 November 2017
The other female needs to molt in a better tail and will over-winter at SOAR.