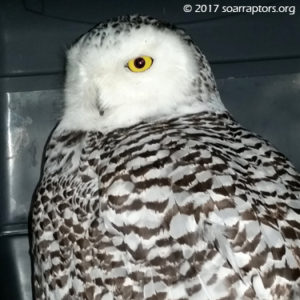 Administrative staff from Quakerdale were diligent in finding help for this snowy owl that was grounded on the property.

Quakerdale staff member, Wes, kept eyes on the bird (and kept her from going toward the county blacktop) until SOAR could arrive… Sorry the wind was so cold, Wes!

“Quaker” is a bit thin and Kay said she has injuries consistent with getting tangled in a barbed wire fence, though no one saw her in a fence.  Have I ever mentioned how much I truly dislike barbed wire? The wound will be cleaned and medicated.

Be on the look out for snowy owls this winter. This has been another of those years called an ‘irruption’ where their breeding area food source (lemmings) had a good breeding year. There was much food last summer for snowy owls and that in turn means the owls had good nesting success. As the winter up there makes food more difficult to find, the adults on a territory will push out the youngsters. Guess where the hatch-year 2017 snowy owls go? Yep… south.

From Carroll County Conservation Naturalist, Matt Wetrich, " P-l-e-a-s-e keep the health and well-being of these owls in mind and do not approach them for better photos. If you are close enough that the owl turns it's head to look at you, your next move should be backwards - you are too close. Most of these birds have traveled several hundred miles by the time they reach here, and many are struggling to make a successful life of it here.

This time of the year they would not fly much during the day. Getting too close to them for a photo and causing them to fly makes them burn valuable calories. Your photo is not more important their life. Thank you."

16 December 2017
Late this past week, Quaker was moved to the flight pen with another snowy owl SOAR received from another rehabilitator that needed time in the flight pen.

9 March 2018
Now that Dickens and Breda have been released... we hope to see Quaker making flight attempts.


While no one saw her hit or be stuck in a barbed wire fence, the puncture wound in her left wing patagium and the swollen area near the wrist are usual barbed wire injuries. The patagium is the fleshy part of the wing just in front of the bone and allows the wing to flex in and out. 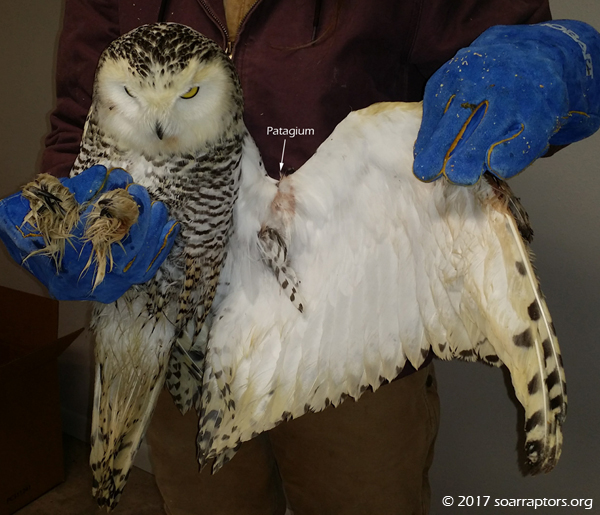 The snowy owl is soaking wet from trying to bathe in her water dish! You can see the injury to the patagium on her left wing. There is also a boo-boo behind the hand holding her wing.