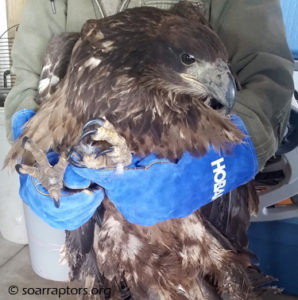 Admission Date: 15 September 2016
Outcome: Released 14 July 2017 at SOAR with another HY16 eagle
Location of Rescue: North of Ridgeway in Winneshiek County
Cause of Admission / Condition: Unknown as to what grounded
Patient Status: Patient Archive, Success Stories

The Game Warden in Winneshiek County called SOAR saying he had a young eagle that needed our help. We met up with DNR staff to transfer this eagle to a crate for transport. Off to meet up with Kay in Ames. This hatch-year 2015 (HY15) eagle is very, very thin and received high calorie fluids before heading out for the final leg of the journey.

Kay was able to weigh this eagle that evening and reported only 7 lbs 10 oz and was likely a female.

27 September 2016
Ridgeway now weighs 10 lbs and could gain more. She was transferred to the eagle flight pen and observed. Her behavior indicated to Kay that her confidence level was not enough to be in the flight pen, so back to the safety of an ICU crate for a few more days.

19 September 2016
Kay reports Ridgeway is eating everything she's been given! 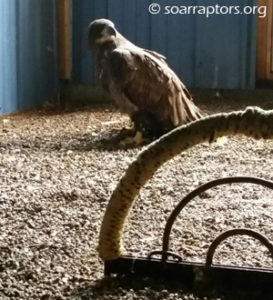