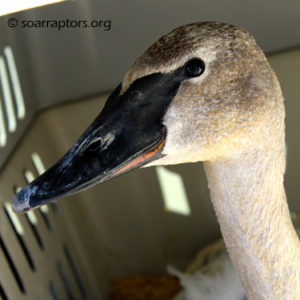 A boater on Lake Red Rock contacted the Marion County Conservation Board about a trumpeter swan not looking very good. SOAR friend Marla and Roberts Creek Park Ranger, Mike Kalkwart, set out with life jackets and rescue gear and boated to the NE area of Roberts Creek Lake where they found this juvenile. No human fell out of the boat and the swan was rescued.

10 March 2017
Swan had been doing better, standing up and wanting out of ICU, so she was moved to a 10x20. Checking on her today, she was no longer standing, so back in ICU.

23 February 2017
The swan was transported (Thank you Terrie and Marla) to SOAR ahead of the predicted winter weather to come on the 24th. Lead toxicity was suspected and a blood lead test revealed what we feared, this juvenile has very elevated lead levels. Fluids were given and chelation therapy started.