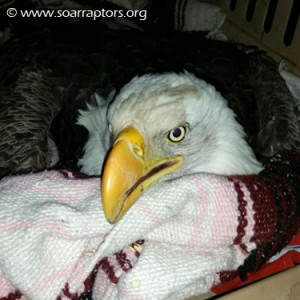 With the help of Iowa Department of Natural Resources Conservation Officer and Osceola County Sheriff’s Deputies, this adult female bald eagle was rescued from the road ditch along Iowa Highway 60 in Osceola County near Sibley.

This excerpt is from the semi-driver that did her best to avoid this eagle and called for help, “She collided with my 18 wheeler last week. She was sitting in the right lane eating road kill when I saw her. I did my best to avoid her and not roll my truck. She took flight but grazed the corner of my hood and caught my drivers side mirror. She hit it hard enough to push it in. I never knew they were so huge! What a beautiful bird. I called the local police and they assured me they would put in a call to DNR.  “DNR for an eagle?”  I said….wondering. (I worked in Healthcare for years, I wondered why they would give a Do Not Resuscitate order before they would evaluate) After her laughter subsided she explained what DNR meant. I shed a few tears worrying if she was okay. I got a call a day later telling me she’d been rescued.”

At rescue and admit, she could not move her legs. A blood lead test was done and with a reading of ‘HI’ (above 0.65 parts per million). She was immediately started on chelation medication to remove the lead. She weighs 13.5 pounds!

18 March 2016
Kay has consulted with The Raptor Center (TRC) on other treatment options for this eagle given the x-ray did not indicate any fractures, but still cannot move legs after a week-plus of supportive care. TRC staff confirmed Kay's suspicion of nerve damage, which cannot be repaired. TRC has not had any success or full recovery with patients presenting with these symptoms / issues and recommended euthanasia.

14 March 2016
A local eagle nest observer believes this eagle could be part of local pair that nests along Otter Creek south of the town of Ashton. The family goes past the nest several times each day and since this eagle was rescued, has only seen one eagle near the nest.

Dr. Dirks took x-rays of this eagle and could see no spinal injuries or other fractures. Sibley will receive steroid treatment to remove any swelling around the spinal cord that could be hampering her efforts to move. Blood was drawn and was sent to a diagnostic lab to test for mercury. The calcium EDTA used for treating elevated lead levels in the blood will also remove mercury. 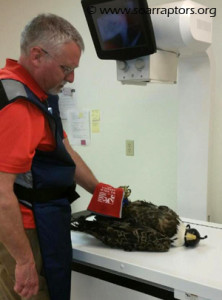