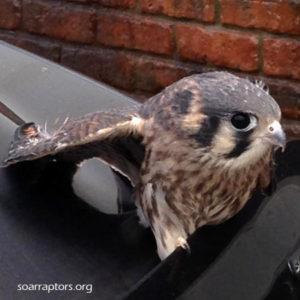 This young female kestrel was found on someone’s car at a Casey’s General Store in Sioux City. SOAR volunteer Tyler said that she appeared to have no injuries, was quite thin, but is eating on her own. She would be classified as a fledgling – she still has little downy tufts sticking through feathers. Fledglings are fully feathered and the size of an adult, are starting to fly and but still relies on adults to bring food. Eventually fledglings will start making attempts to hunt on own and will do so with increasing success.