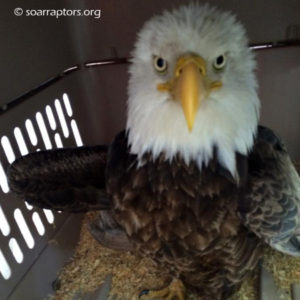 Residents north of Pella on County Road T14 reported an adult eagle not able to fly on their property in the evening of 14 May 2016. SOAR friend Marla loaded a crate in her car, grabbed her protective gear, and drove to the address. The homeowners and another neighbor helped located the injured eagle as Marla picked her way through the brush on the edge of the property!

As of now, we are thinking this is a male and by the molt pattern are thinking a young adult. Marla reported swelling and a large knot around the right wing radius / ulna. By the morning of the 15th, Marla reported the swelling was extending down toward the wrist. The eagle is not thin, but readily ate for Marla. (The group that helped with rescue noted there was a deer carcass not too far down the road and several eagles had been seen dining.) Transfer to Kay was scheduled for Monday.

19 July 2016
We gave him more time, with fingers crossed, but the joint never did improve and this eagle was euthanized.

14 June 2016
No improvement was seen in the wing, so a trip to see Dr. Dirks for a second x-ray. Dr. Dirks confirmed dislocation and tried, but unsuccessful in getting the joint in better position. The eagle is in the flight pen, but prognosis for full recovery is very slim.

16 May 2016
Eagle transferred to Kay, she (Kay) doesn't think the bones are broken, but an x-ray will confirm. Infection? Bruising? X-ray today at Manning Vet Clinic, no fractures, possible dislocation.