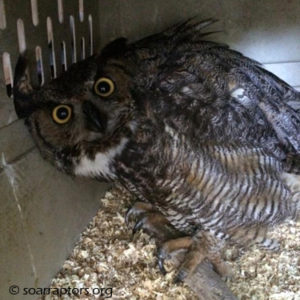 SOAR friend Marla received a call of a great horned owl that had been down near Old Hwy 92 in the Tracy area.  Thanks to the concerned citizen (also nearby landowner) for the persistence to get this owl some help! The owl has a simple fracture of the ulna in her right wing and some bruising at that wrist. Considering where she was found and that she has a wing injury, we suspect she collided with a vehicle.

We’re not sure exactly on this bird’s age, but Marla thinks she is a young bird as she is so curious at watched Marla’s every move… to the point of turning her head upside down if the owl couldn’t see Marla’s face. No, this is not typical adult GHO behavior, so may be an early hatch-year 2016 bird?