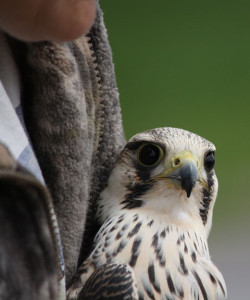 This blond, hatch-year male peregrine with no bands was received in September 2010. He is migratory and his very light color is an indication of a tundra sub-species, so is likely from Canada. He had a bruised and swollen wing, with a non-compound fracture of the radius-ulna. Even though his wing was healed and he had time in the flight pen before winter set in…because he is a migratory species…he was moved to a more weatherproof flight pen, which is smaller, so he again needed time in the larger flight pen this spring before he could be released. 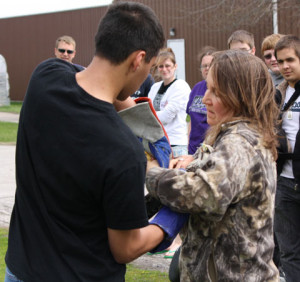 Kay hands off the peregrine to Shawn for release.