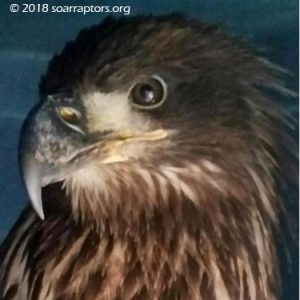 The Conservation Officer in Hardin County was being bombarded with calls about an eagle walking the blacktop near Union and was not in the area, so got word to SOAR. After consulting with county dispatch on the last known location, this hatch-year 2018 bald eagle was found UNDER a bridge a few miles west of town.

Once rescued and up out of the ditch, the first vehicle to come along stopped and told us that folks in the area had been seeing this eagle walking the shoulder of the road for several days. She was quite thankful to see her rescued… even though at that time the eagle’s condition was quite serious.

This young female is emaciated only weighing 6.5 pounds in the perky picture taken two weeks after admit. She does not have an eagle appetite yet. We’re hoping that the rats that came today (thanks to our incredible donors) will be of interest to her!