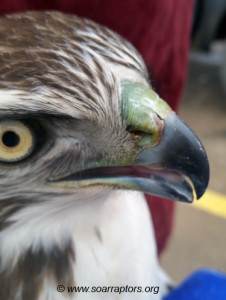 Thanks to a concerned motorist along US Hwy 34 in Monroe County and several folks along the way… a juvenile male red-tailed hawk was admitted. Not sure if the hawk collided with something or was hit by a vehicle. He has a crack in his cere (the fleshy part around the nostrils where beak meets feathers), see photo left, and all primary feathers on the left wing are frayed and gone. He is thin, so was likely on the ground for quite some time.

29 March 2015
Look for a late summer release for this hawk... after a complete feather molt.

2 March 2015
In the flight pen waiting to molt and grow new feathers.