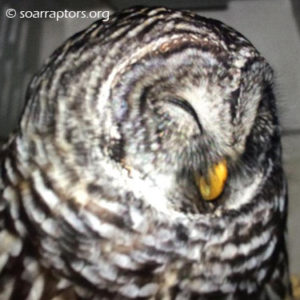 A concerned citizen rescued a grounded barred owl along US34 east of Albia. Thanks to help from friends, they were able to get in touch with SOAR and then delivered the owl to SOAR friend Marla in Marion County. Marla reported on admit that the owls feet were clenching and flexing and that the wings appear okay, but seemed dazed and stared at own feet.