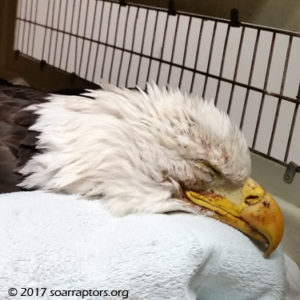 Our friend, Brody, with Franklin County Conservation called on the 20th that they had report of a farmer finding a dead eagle where he was doing fieldwork. Brody called back to say the eagle wasn’t dead, but appeared barely alive and laying on his back. He rescued and the transfer was made that evening.

At first, none of us knew what to think. The only thing we knew is that the eagle lost blood through the mouth, so impacted something. His breathing was regular and shallow. The eagle responded to touch when assessing for body condition and warmth.

This bald eagle also slept through the 21st and 22nd.

23 November 2017
The eagle is standing and later this day was awake enough to receive fluids. Ate food offered with forceps in the evening.

Now, we're thinking this eagle was reacting like there was anesthesia in his system?? Just enough for a very deep sleep, thankfully not Rip Van Winkle's 20 years.

Where could a wild animal not under the care of a rehabilitator or veterinarian "get" anesthesia - by eating an animal that was euthanized but not properly disposed. We have no idea how fast a euthanasia drug would metabolize in the next animal (i.e. this eagle) to know how far he flew before he was too impaired to continue.

27 November 2017
Moved to the 100' flight pen and immediately went to a high perch. This eagle now needs evaluated for stamina. 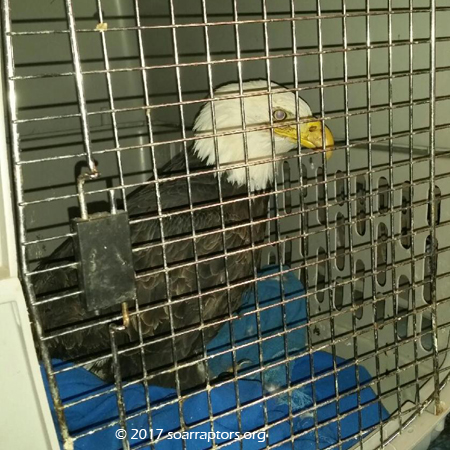 20 November 2017 bald eagle admitted from Franklin County. Finder thought eagle was dead. Not so… very shallow breathing. Here is Van Winkle wide awake in the crate on the 23rd.