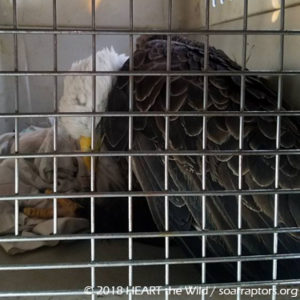 “Yesterday evening (2/13), I got a call from our DNR Officer. Two snowmobilers, Jeremie and his brother Lance, came across a sick looking eagle on the ice of the Big Sioux River, 2.5 miles north of Hudson, SD. I got my rescue gear ready and threw a sled in the back of my truck. I was prepared to make the 5 mile round trip with an eagle on board my sled. I grabbed two flashlights, because I always plan on one failing me. It was nearly 6:00 PM and daylight was almost gone. Thank goodness Jeremie and Lance were waiting for me and just told me to hop on. I told them “I’m just going to grab the eagle and hold it on the snowmobile.” So, that is what we did.

These guys knew full well what they were looking at. The eagle stood there and then stumbled forward onto its face where it would convulse and then regain its standing position. I tossed the blanket over its body and then folded him into my arms like an accordion. He let out the most heart-wrenching sounds; sounds of pain. He breathed hard, deep sounds came from his throat as he struggled to breathe. All of us knew what was happening here. Yet another eagle victim to lead poisoning. This is the third that I have rescued in the past three years with lead poisoning.

I met Kay with SOAR – Saving Our Avian Resources today (2/14) and we looked the eagle over more. Several times while driving down the road, I could see the crate I had him in shaking. He was convulsing so violently and making such painful sounds. Kay noticed a very obvious hole through both the upper and lower beak, possibly as a result of shot. The x-rays tomorrow will hopefully disprove our inclinations. Kay ran a blood test and texted me back with the results. His blood lead levels are higher than 0.65 ppm. I asked her how that compares to other eagles she has admitted, she replied that her machine only reads as high as 0.65 ppm. So this guy’s levels are higher than what can even register. His chance of survival? 10%. That’s the success rate of the chelation process he will undergo with Kay.

15 February 2018
X-ray indicates Warrior was not shot and does not have any lead fragments in his digestive tract. He was started on an anti-inflammatory medicine to hopefully help with the brain swelling and seizures.

17 February 2018
Warrior is still eating and pooping (a necessary thing!) and the seizures seem to be lessening.

22 February 2018
Warrior is still receiving chelation treatment to remove the lead from his body. He is eating if hand-fed. He is up on his feet and the seizures appear to be slowing. We are still not out of the woods...

27 February 2018
Still has head tilt, but on the positive is showing an interest in food, but not eating on own yet.

7 March 2018
His chelation treatment has been backed off to once a day and he has been responding well. His seizures have stopped with the anti-inflammatory medication that alleviated the swelling in his brain. He is able to hold his head a little better and he is able to eat on his own. His vision, however, does not seem to be improving (due to the pressure the brain swelling had on his optic nerve) and is being monitored closely.

23 March 2018
Warrior was moved out of an ICU crate to a 10x20 area. On the way... a blood lead test. His blood lead level is still elevated but is ready to be out of intensive care. He will be monitored for symptoms. 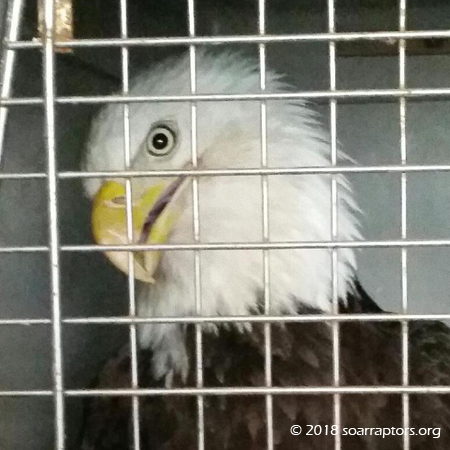 Sorry, no pic with the crate door open as Warrior will not sit still with the door open. Guess that is a good sign. He still has a slight head tilt.