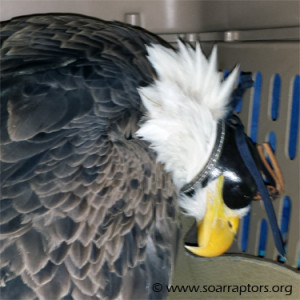 Raptor Resource Project (RRP) received word of an eagle down in a field near Sampson Springs Campground (so he was dubbed Sampson) and not appearing to be well. RRP Board Member Dave K headed out to see if he could rescue the eagle. He found the eagle walking in circles in the field to the point of having grasses wrapped tightly around one lower leg. Dave was able to rescue, remove the grass, and met up with a SOAR volunteer transporter to get the eagle to Kay as soon as possible.

The eagle continued walking in circles in the transport crate and was also doing some open-mouth breathing. The mutes (raptor poop) were not the color of a healthy bird, but tinged green. The eagle was also hanging his head. These are signs of the eagle having ingested lead in its system.

The intent was to meet Kay in Ames the same day. Iowa winter weather and road conditions dictated otherwise. We both went to bed with fingers crossed. ~Linette

30 January 2016
We were working against the odds with this eagle. She had two strikes against her by the time she was admitted -- her extremely elevated blood lead level and her weight loss. Lead is an absolutely horrible toxin that impacts all bodily functions. Her kidneys and liver had shut down. Samantha Eagle died sometime after last check on Saturday and first check on Sunday. The only solution to this problem is prevention.

28 January 2016
She had some meat yesterday in addition to the high calorie fluids. Not all the food stayed down. She favors the leg that had the grasses wrapped around.

26 January 2016
With improved road conditions, Kay and I met in Ames to transfer the still-alive eagle. Kay drew blood and prepped for a blood lead level test when she got home, gave Sampson his first chelation injection (to start removing the lead from his system), and gave fluids before the ride home. 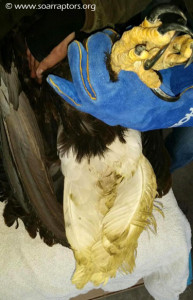 Green staining on the tail is from the lead in the eagle’s system being ‘pooped’ out. Dehydration causes the tongue and mouth lining to turn purple. 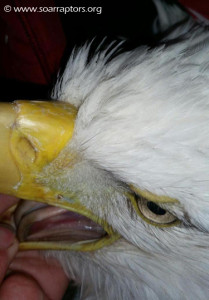 Here is a short video of the open-mouth breathing… let’s blame operator error for the no sound! 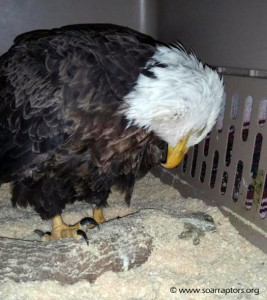 25 January 2016 admit from Winneshiek County is still alive after third round of chelation, fluids, and small bits of venison and pigeon…dark red meat high in iron helps anemia. Spinning in circles has stopped.