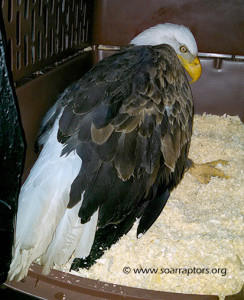 We’ve often said that it takes a village to rescue and care for injured raptors. Today was no different. Thanks to a farmer’s curiosity of getting a closer look at an adult eagle near a neighboring landowners pond, he soon discovered that this eagle wouldn’t / couldn’t fly away, but was disoriented and had no balance. A couple phone calls later and Tyler was loading his kayak into his pick-up as the eagle was sitting on ice in the pond. The farmer contacted the tenants to cross their property via truck to gain access to the pond and eagle. With hip boots on, Tyler safely rescued the eagle from the water. This big girl did not look good and as soon as she was safely in a carry crate in his truck, Tyler was en route to meet up with Kay.

This eagle’s blood lead level was above 0.2 parts per million, which indicates lead toxicity. Her legs were also stiff and feet clenched — signs of a probable other neurotoxin.

This beautiful bird died within 24 hours of rescue. Tyler would like to thank Kathy and Lynn for referring phone calls, Mr. Byers for making the initial phone call and for having the curiosity to check out the situation, and to the Miller family for permission to cross their land.

22 March 2015
X-ray taken on 18th showed no lead in the digestive tract. Liver lead level will be obtained.