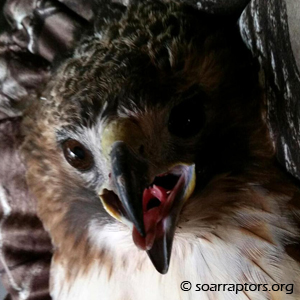 Wright County Conservation park ranger rescued a very old red-tailed hawk that was grounded. The hawk has no fractures but the bottom of his feet are a bit blackened, electrocution. The hawk is resting comfortably in an ICU crate. As red-tailed hawks age, the eyes get darker brown!

Also thanks to the ranger’s parents for transporting to Jefferson for Kay to pick up!

6 February 2017
This hawk did lose one talon on one foot, but this is an older, experienced hawk and should still be able to catch mice! Released!

30 December 2016
In flying in the flight pen. A couple toes on one of the hawks feet do not look good and he may lose parts of them, but should have enough left to perch.